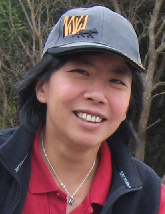 Maylene is a marine scientist who has worked on a wide ranch of projects. As a research scientist with CSIRO, she was involved in the project "Seafloor geological characterisation of the Great Australian Bight submarine canyons, potential hydrocarbon seeps and volcanic sea mounts" which took her on several voyages aboard the RV Investigator (Australian state-of-the-art research vessel) to the Great Australian Bight. The next project "Sampling the Abyss" took her back on the RV Investigator, looking at latitudinal biodiversity patterns along the base of Australia's eastern continental margin from Launceston to Brisbane. This was followed by another voyage aboard the RV Investigator along the west coast of Australia, on the project "Long-term recovery of trawled marine communities 25 years after the world's largest adaptive management experiment". On all these projects, she managed fauna data acquisition and the database onboard. Prior to this, she was the Aquaculture Environment Subprogram Leader at the South Australian Research and Development Institute (SARDI), working on projects including development of novel techniques for cost effective assessment of environmental impacts and development of trophic model for use in an ecosystem based fishery management framework.

Before she obtained her PhD from the University of Adelaide, she worked in the tropics as part of a team from the National University of Singapore in collaboration with many ASEAN researchers on various marine ecological projects on coral reefs, mangroves, seagrasses and soft-sediment benthic ecosystems. From this work, she has extensive experience on sampling and monitoring techniques. She also has a good knowledge on data management and statistical analysis of large data sets, having been a country representative for regional data integration and management previously.

Maylene became the President of AMSA SA Branch after a re-launch of the branch in 2005 and has been actively involved since. She joined the National Council in 2013 and was the National Treasurer from 2014 to 2019 and is currently the Secretary.